You are travelling to Duesseldorf and you would like to see some of the popular places in the area? Then try the INTERLINE Sightseeing Service. Our multilingual chauffeur guides know their stuff and take you to the most interesting attractions. Sightseeing has never been that comfortable or that exclusive. Listen and enjoy – your guide will provide you with some interesting facts along the way. These tours are only an inspiration – we certainly can organize personalized sightseeing tours to match your specific interests and requirements. 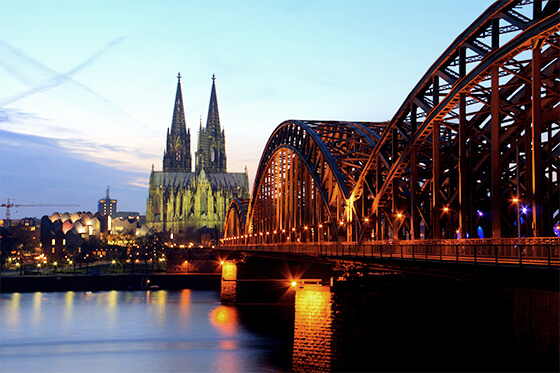 From Duesseldorf we start our tour southwards and our first destination is the city of Cologne, where Germany's most visited landmark is to be found: The Cologne Cathedral. In 1996 the gothic church was added to the UNESCO World Heritage List of culturally important sites. Our next stop is Beethoven-Haus, the great composer’s birthplace and a main attraction in the city of Bonn. Ludwig van Beethoven was born in the house at Bonngasse 20 in 1770. In the afternoon we head for Solingen where you can visit Burg Castle on the Wupper, one of the largest reconstructed castles in Germany. In Burg Castle you can visit various historic rooms. Guided tours are available in German, English or French.

From Duesseldorf we turn south and after 90 kilometers we stop at Bad Muenstereifel, one of the rare towns in the area whose medieval city walls have been preserved. There are four town gates, a castle (Burg Bad Muenstereifel) and also some romantic bridges across the Erft River. When you go for a stroll, you come across historic narrow alleys and many carefully restored medieval buildings. The next excursion destination is Eltz Castle, one of the few castles in Germany that have never been destroyed. The castle is situated on a rock of 70 meters high. It is surrounded by the Eltz Forest and on three sides by the Eltzbach River. There are daily guided tours from April to October. Several rooms are open to the public. Visitors can also view the treasury, with gold-, silver- and porcelain-artifacts, and the armory of weapons and suits of armor. 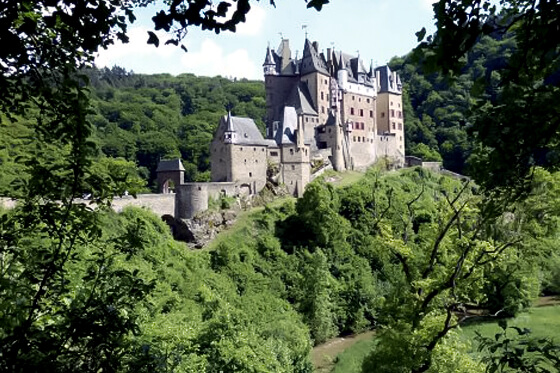 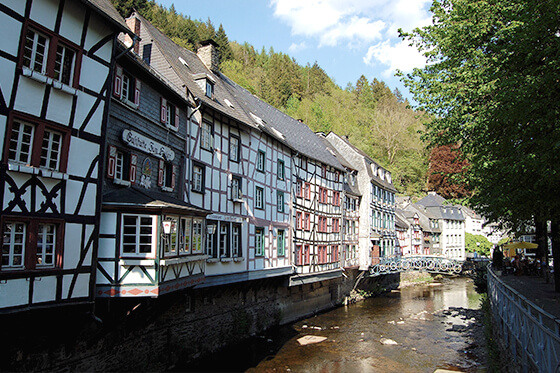 Our excursion takes you to the westernmost area of Germany near Belgium and the Netherlands. Our first travel destination is Aachen, former residence of Charlemagne. The Cathedral of Aachen was the first German building to be included in the UNESCO World Heritage list in 1978. It is one of the most famous examples of Carolingian architecture and Charlemagne‘s burial site - it houses the emperor’s shrine. Our next stop is Monschau, which is located about 40 kilometres southwards. From Monschau Castle, which is situated on the heights above the city, you can enjoy a marvellous view of the Old Town, with its half-timbered houses and rubble masonry buildings. Just go for a stroll through Monschau’s narrow winding alleys and discover historic places like the Red House: A visit takes you on a time journey back to the 18th century.

You have declined cookies. This decision can be reversed.

You have allowed cookies to be placed on your computer. This decision can be reversed.